What Causes Sleep Paralysis And Demon Visions On Your Chest?

Day to DayUniverse
By Snigdha N 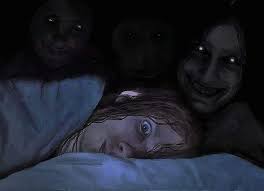 Sleep paralysis, which is a parasomnia (or sleep disorder) in which a person is fully awake and aware but unable to move or speak. It is frequently accompanied by a sinister presence, vivid hallucinations, and a sense of suffocation. Some people may even feel as if they are dying.

Although sleep paralysis differs from nightmares, the two share an etymology. The Old English term mare denoted an oppressive spirit (tormenting women in male form as the incubus and men in female form as the succubus) that sat upon the chests of sleepers, causing suffocation. The mare, according to researchers, was inspired by sleep paralysis. The link is clear in Henry Fuseli’s 18th-century painting The Nightmare, in which a goblinesque figure crouches atop a woman’s sprawled, immobile body.

Given the heinous symptoms, it’s understandable that our forefathers would attribute sleep paralysis to demonic forces. However, sleep scientists have concluded that it is a normal part of the sleep cycle that occurs occasionally, abnormally, in the semi-conscious moments before and after sleep. It has been described as a mixed state of consciousness by some. A bout typically lasts seconds or minutes but can last much longer.

Atonia is the loss of muscle control, and it, too, has a place in Rapid Eye Movement (REM) sleep, which is when most dreams occur. Brain signals cause muscle tone to decrease, inhibiting motion and preventing us from acting out our dreams. We become aware of the distressing inability to move only when atonia persists into wakefulness.

According to one 2011 study, approximately 8% of the general population suffers from sleep paralysis, though the rates are much higher — around 30% — for both students and psychiatric patients. Isolated cases of sleep paralysis occur infrequently for some people. Others, on the other hand, suffer from recurrent sleep paralysis, which is commonly associated with narcolepsy or excessive daytime drowsiness.

The framework within which various cultures interpret sleep paralysis may also influence how their members experience the disorder. According to one study, it is far more common in Egyptians than in Danes, and Egyptians who attribute it to supernatural causes also fear it more. If this anxiety causes people to avoid sleep, it can exacerbate the problem and lead to more episodes.

Despite the physical and psychological consequences of sleep paralysis, it is still a poorly understood phenomenon. Its origins are unknown, but research has linked it to stress, lack of sleep, excessive alcohol consumption, and even leg cramps. There’s also a link between sleep paralysis and other sleep disorders like narcolepsy and obstructive sleep apnea, which causes interrupted breathing.

More research is needed into the treatments for sleep paralysis, as well as the causes. In some cases, doctors may try to treat the underlying conditions, such as narcolepsy and sleep apnea. In others, however, the most straightforward option may be to improve sleep habits and get at least seven hours of restful sleep each night.

Also read : Ouija: The Game That Shouldn’t Be Played