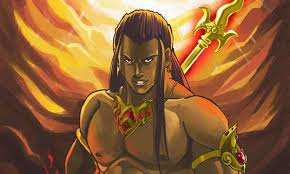 He was Dronacharya’s son and plays an important role in the Mahabharata. He opposed the Pandavas because he was a close friend of Duryodhana, the eldest of the hundred Kauravas. He was a genius with all the weapons because he was Dronacharya’s son. He also had Bramhastra, which his father had given to him out of love, despite the fact that he was not the ideal person for it. Since his birth, he has worn a jewel on his forehead that was given to him by Lord Shiva and has protected him from all wounds and illnesses. Because he had committed so many offences, Lord Krishna came to justice and took away the diamond.

Once upon a time, a king named Mahabali reigned. He was a generous and benevolent king who was the son of Virochana and Devamba. He treated his people fairly and with dignity. He also gained immortality by drinking the amrita (stolen from the gods by asuras), thus becoming immortal and more powerful than the gods.

Vyasa is the legendary author of the Mahabharata, Vedas, and Puranas, which are among the most important works in Hinduism. He is also known as Veda Vysa (, veda-vysa, “the one who classified the Vedas”) and Krishna Dvaipyana (referring to his dark complexion and birthplace).

Guru Purnima is a festival dedicated to him. It is also known as Vyasa Purnima, which commemorates both his birth and the division of the Vedas. According to Hindu tradition, Vyasa is one of the seven Chiranjivis (long-lived or immortals) who are still alive.

Lord Hanuman requires no introduction; he personifies devotion, and his strength, form, and knowledge distinguish him. It is said that while other characters in the Ramayan attained their desired Moksha, Hanumanji chose to remain on Earth as long as Lord Ram is revered by people, to reside wherever the name of Ram is taken- such was and is his love for God. Whoever recites Lord Hanuman’s glories is said to be certain of overcoming life’s trials and tribulations. It is also said that Chiranjeevi Hanuman is always the person who arrives first and leaves last from a Ram Katha. There is an intriguing story about a pilgrimage in Mansarovar, Himalayas, in 1998.pilgrim allegedly saw a light in the cave and photographed it. He died soon after, just as his fellow travellers were having the photo developed. It depicts a monkey-like being studying what appears to be the Vedas.

Vibhishan, Ravan’s brother, fought on Ram’s side in the Ramayan. He was made a Chiranjeevi in order to uphold morality and righteousness in Lanka and to guide people all over the world in Dharma.

During the Mahabharat, Kripa was the Kul Guru of the Kurus, and while his status as a Chiranjeevi is debatable, his impartiality toward all of his students is the most commonly documented reason for his immortality.

Vishnu’s sixth avatar, master of all astras, sastras, and divine weapons. According to the Kalki Purana, he will reappear at the end of time as Kalki’s martial guru. He will then instruct the final avatar to perform penance in order to receive celestial weaponry, which will be required to save mankind at the end of time.

Markendeya is a devotee of Lord Shiva, who granted him immortality during a battle between Shiva and Yama (the God of Death). According to the Bhagavata Purana, sage Narayana once came to Markandeya and asked for a boon. Since sages Nara-Narayana are incarnations of Supereme Lord Narayana, Markandeya prayed to sage Narayana to reveal his illusory power or maya. To grant his wish, Vishnu manifested as a child floating on a leaf and declared to the sage that he was Time and Death. Sage Markandeya entered his mouth, saving himself from the rushing water. Markandeya discovered all the worlds, the seven regions, and the seven oceans inside the boy’s stomach.Mountains and kingdoms were all present. All living things were. Markandeya had no idea what to make of it all. He began to pray to Vishnu. The sage was with Vishnu for a thousand years. At this point, he composed the Bala mukundashtakam.