Red Coral, A Gem That Makes You Healthy And Energetic 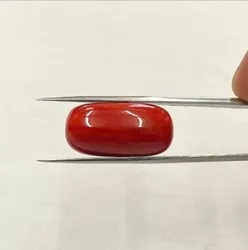 The planet Mars is associated with the precious stone red coral in astrology. Red coral is set on the southern side of the “navaratna” ring, which is set with all nine valuable gems.

Many young people from wealthy households were excited to receive this stone as a present in the past since it was thought that red coral helped children become smarter. Red coral was regarded highly in Buddhism as well and was one of the seven treasures.

According to science, Isis, a marine organism that lives close to the ocean floor, creates coral reefs on rocks beneath the water. It then makes these coral forms its home.

Isis is sometimes referred to as the marine honeybee by biologists. Similar to how bees excrete material that helps form colonies, these marine animals likewise make something sticky that helps build coral reefs. The sea’s artificial reefs proliferated like leafless creepers. A coral reef may typically be one foot high and one inch thick. Isis has residences in several of these formations’ fissures.

To create stones of gem-quality, these corals from underwater rocks are mechanically shaped into exquisite shapes. The corals, which are made of calcium carbonate, change color depending on the color of the sea where they are found. However, crimson, deep red, saffron red, and orange are the most popular colors.

Not all oceans contain coral. While the kinds found in China, Indo-China, the Philippines, and Italy are attractive, those in the Mediterranean Sea and Indian Ocean lack thickness. Conversely, the corals found in Japan are both more attractive and thicker than those found elsewhere.

evidence of a live coral

A true coral can be determined using a variety of techniques. For instance, synthetic corals weigh more than real ones. A sound like abrasions on glass could be heard when a pure coral was scratched on the floor.

Immersing both in cow’s milk is another way to tell a real coral from a sample that was created artificially. In milk, a real coral develops a reddish coating, but an imitation jewel does not.

Similar caution must be used when selecting coral that doesn’t have any flaws. Inauspicious characteristics include those with two colors, splits, holes, black or white patches, worm infestation, scratches, sporadic depressions, and the color of lac.

According to astrology, Mars has been given the Southern orientation since it is thought of as a fiery planet. South, incidentally, is associated with Yama, the creator of death. Furthermore, red is a color related to Mars.

Fire represents illumination and bravery. Death also has an impact because Yama is connected to Mars and fire. Red, which is also the color of blood, is another element. Given these factors, astrologers advise wearing red coral to protect you from fire, accidents, and to anticipate and avert potentially fatal events.

According to Hindu mythology known as the Puranas, Valasura was an asura (devil) whose organs were used to make all the diamonds. According to this theory, the red coral was created from the flesh that separated from the demon’s body.

The relationship between red coral and Mars and a person’s physical well-being is profound. The priceless stone is thought to provide relief from illnesses associated with Mars, such as chicken pox, menstruation-related issues, sexual dysfunction, blood-related illnesses, accidental injuries, sprains, eye disorders, and brain injuries.

The gem has also been found to boost self-confidence. Yet another benefit of wearing red coral is that it is believed to prevent heart diseases and epilepsy.

When red coral is kept in the house, it is believed to protect you from the trouble created by spook…