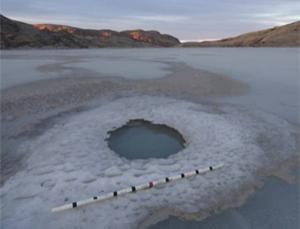 More methane, a potent greenhouse gas, could enter the atmosphere as a result of melting Arctic permafrost than previously thought, which would be concerning for the rate of global warming.

Methane naturally seeps from many ice sheets that cover rock cracks; when they melt, the gas can be promptly burped into the atmosphere. Although no one is certain of the exact amount, geologists have long hypothesised that iced-over geological structures may contain enormous reserves of prehistoric methane that seep from coal and gas sources.

As the Arctic warms, these stores, together with deep-water ones and shallower (more recent) ones of decomposing plant matter on frozen soil, might release enormous volumes of methane. Then, as the weather becomes warmer, more methane seeps may occur.

In search of holes in the ice that might be signs of lakes with methane seeps, Katey Walter Anthony of the University of Alaska in Fairbanks and her colleagues flew planes over 6700 lakes in Alaska during the winter when the state was blanketed in ice. To ascertain the age of the gas, they analysed the gas from 50 holes and carbon-dated the methane seeping from them. They conducted a similar investigation in 25 Greenland lakes.

The researchers discovered old methane, indicating that it originated from deep inside the Earth and is only now being released, at limits where permafrost cover is melting or glaciers are retreating. The group then developed a model that predicted the locations of these natural pockets in lakes across Alaska. The borders of ice sheets were where they discovered the most likely spots.

In comparison to earlier estimates, the team calculates that Alaska is spewing 50–70% more methane into the atmosphere. According to geological records, the idea would also apply to deep methane deposits in Siberia and Canada that are presently covered by ice.

According to Walter Anthony, the Antarctic’s oil and gas reserves suggest that it may also contain prehistoric methane. The US Geological Survey in Woods Hole, Massachusetts’ Carolyn Ruppel said, “This is a considerably more nuanced research than has been done.” Despite her respect for Walter Anthony’s modelling work, she emphasises how challenging it is to extrapolate the results to draw conclusions about methane seeps on other continents.

According to Walter Anthony, any release of methane might quicken the process overall and speed up warming at the poles, though it’s difficult to say with certainty when this might occur. Her team intends to investigate how methane is caught, stored, and melted in permafrost in order to provide an explanation.