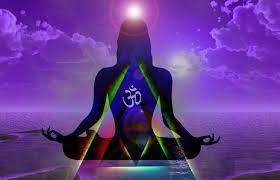 The sacred syllable OM, [AUM], is the primary symbol of God, a deity who manifests himself in an infinite variety of shapes, colors, and structures, as well as nature itself. The Hindu conception of the supreme being includes the symbol OM. All that is sacred in Hinduism is contained and closed by one mystical syllable.

Pranava Mantra is OM, which is the very summoning of the global soul. OM represents the greatest vibration, the infinite, and is a reflection of knowing absolute truth, without origin or end, embracing everything that exists.

The Sanskrit word OM stands for threefold temporal division and is pronounced AUM (wakefulness, dreaming, and deep sleep). It also symbolizes God, who is the source of all Consciousness. It is thought to be the sound of creation, representing everything in the universe and allowing practitioners to nurture energy that travels upward via the chakras and outward through the crown.

OM is also known as the mother of mantras, which are short and powerful sounds associated with each chakra, according to yoga, Hinduism, and Buddhism teachings. It connects us to the Divinity via linking to the third eye or crown chakra.

This chant decreases activity in the limbic system, which is the region of the brain connected with stress and emotions, according to a study published in the NCBI. Researchers discovered that incantation soothes the brain and thus reduces stress by measuring brain activity. It could also be used to treat depression, according to another study.

Endorphins are released during OM meditation, making you feel relaxed and refreshed. It also lowers adrenaline levels, which are linked to stress. In other words, this meditation aids in the regulation of hormones and the reduction of mood swings.

If you’ve ever tried meditation, you’ll understand how this advantage works. The eighth discipline of yoga, Dharana, is the Sanskrit term meaning focus, according to yogic literature.

One can meditate and sing mantras to achieve optimum concentration in concentration practice. In this context, this signifies that the yogi is totally present, and so the mind can be slowed down to focus on a single issue or to be reduced to complete quiet.

OM is linked to the chakras of the body. From the base of the spine to the top of the head, the primary chakras are placed. These chakras function as energy centers, and when they are stimulated by the sounds of the OM, they respond positively, reactivating internal energies and restoring energy balance.

Irritable bowel syndrome symptoms can be relieved and gut health can be improved by chanting OM, according to a Harvard study. Participants in the study reported less symptoms, less anxiety, and a better quality of life as a result of triggering the relaxation response. As a typical meditation practice, enchanting OM can also generate a sensation of calm.

Meditation has been found to benefit heart health in the past. This can be considered a type of meditation if it is done by repeatedly chanting the mantra OM. A 2006 study looked into the benefits of transcendental meditation, a type of meditation in which the practitioner repeats the phrase OM over and over again, and found that it can drop blood pressure and reduce the risk of coronary heart disease.

The chanting of the mantra OM produces a positive vibration in the body, which attracts positivity into your life. Enchantments allow you to gaze inward and focus on the third eye chakra. If you’re having trouble stopping negative thoughts, reciting the mantra OM a few times will help.

Om has a lot of health benefits. It causes the rib cage to vibrate, and the inside of the body to tremble as well. The lungs benefit from the deep exhalation that comes before it, which allows them to fully open. The act of breathing expels all of the air from the lungs. These are frequently contaminated with stale air. Yoga and Om are therefore recommended for ventilating and purifying oneself – preferably in a well-ventilated setting.

Chanting OM is beneficial not only to people who practice it, but also to those who are in their immediate vicinity. The spiritual vibrations produced by pronouncing OM override the negativities circulating in the surrounding environment. Additionally, chanting OM keeps positivity in the room or stops it from leaving.

10. Maintain the rhythmic activity of the heart

The heart is calmed by chanting the OM mantra. It keeps the cardiac cycle in its natural rhythm. The sound Ooh reaches the upper body from its original navel point when we begin reciting OM. This travels throughout the practitioner’s thoracic region, maintaining the heart’s natural beat.

Chanting OM might help you connect with Self and regulate your emotions if you’re feeling depressed. As you chant, you may notice that your mind begins to clear. Because you’re concentrating on the sound or vibration that OM produces. The frequency of OM is identical to that of everything in nature, allowing you to connect profoundly and turn inward.

The study found that OM chanting can boost alertness even when people are already relaxed, as seen by a lower heart rate. When compared to a control group engaged in non-targeted thought, meditators who chanted OM demonstrated a statistically significant reduction in heart rate.

OM chanting has been linked to increased mental alertness and relaxation, as well as a sharpening of the senses, according to research. To put it another way, chanting OM and meditation help you become more present by allowing you to connect intimately with your body and surroundings through sight, hearing, smell, taste, and touch.

People’s health and sleep patterns are affected by stress and busy lifestyles. People who meditate and recite OM before bedtime, on the other hand, can sleep with a calmer mind. Sleep patterns become more regular over time, and the quality of sleep improves.

These are just a few of the advantages that chanting the OM mantra can provide. To reap the full benefits of chanting OM, you must practice and experience it for yourself. There is no right or wrong method to meditate and chant OM; you can repeat OM as many times as you choose, but 108 is the perfect quantity.